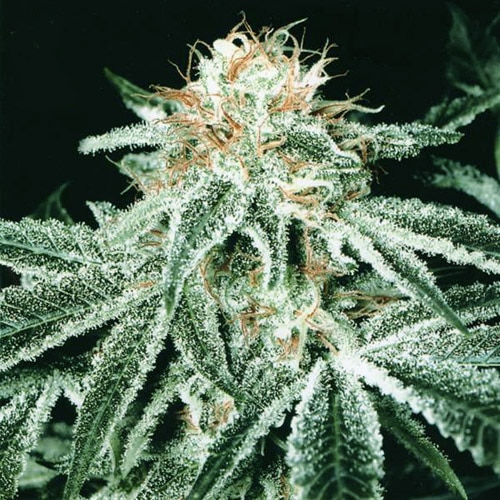 Here we see a beautiful picture of White Widow that looks like its been dipped in sugar.

Looking at this it is quite easy to understand why the White Widow strain is still one of the most popular and successful hybrids out there.

White Widow is known for being both extremely potent and extremely resinous. It is a 60/40 indica/sativa cross displaying the indica’s ability to help with pain and the sativa side that helps enhance mood.

Just about every breeder has their own version of the White Widow weed. It is hard to trace the origins of this strain because so many seed companies claim to have the original.

However, after a lot of digging around, I found what seems to be the best account of where the White Widow plant actually came from.

The name White Widow is usually linked with several different breeders and today almost every seed bank offers its own version of the plant. The battle over who actually invented the strain has turned into a political struggle, dividing the public into two camps.

Some believe that the White Widow was discovered by a man named Ingemar, while others take the side of another skillful breeder known as Shantibaba.

Although the history of this plant is complicated and shrouded by doubt and misinformed opinions, the truth must be that only one person can be accredited with bringing White Widow into the world.

My research has lead me to believe that this person is indeed Shantibaba, the former co-owner of Green House Seeds and current founder of The Mr Nice Seedbank, for reasons that I will explain in this article. http://blog.seedsman.com/the-origins-of-white-widow-marijuana-strain/

The White Widow strain has been crossed to make many hybrid substrains including.

But because of White Widow’s potency and complex high and its short 60 day flowering cycle, I believe that the original White Widow is a strain every grower should try at least once before growing its hybrids.