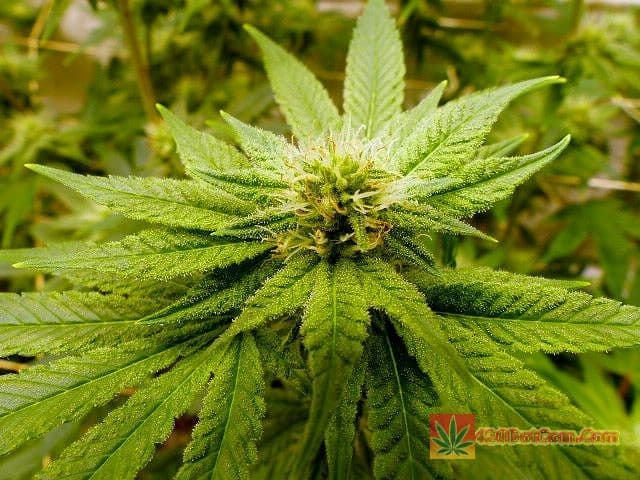 Here is my GG4, Peanut Butter Breath, Space Goo OG, and Bruce Banner Mixed Grow. I have 10 plants in my 2 x 4 flood tray all in 1 gallon root maker pots. Some are in coco and some in rockwool croutons.

There are 6 GG4, 2 Bruce Banner and one each of the Peanut Butter Breath and Space Goo OG. They are under 700 watts of COB LED lighting. Actually it’s a bit more like 750 because the Pacific light Concept COBS pull more than the rated 250w from the wall.

The girls are currently in veg and will probably be flipped within a week. I’m just waiting for the Glue to size up a bit more. They are being fed on V+B nutes, the RO formulation. It’s nice to be able to use the same nutrients all the way through the grow. And I like the fact of not having to keep a bunch of different bottles around. So far they have worked pretty good for me and I definitely like the simplicity of use.

Here is some background info on these strains:

These are my 2 keeper  phenos from my Bruce Banner grow Lots of info on this strain in my grow. One is an OG leaner with beautiful purple buds and the other leans towards the diesel side. 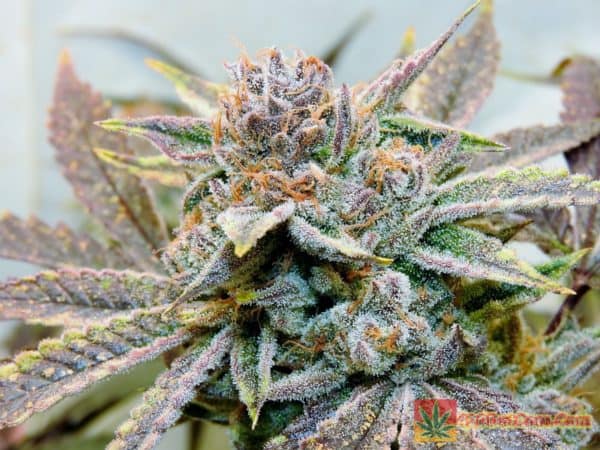 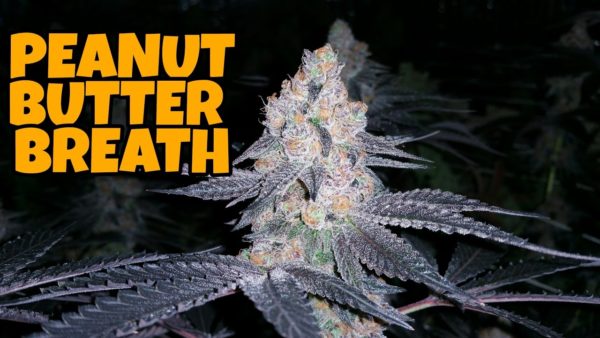 Peanut Butter Breath is a pretty new strain from Thug Pug Genetics. It is supposed to be a 50/50 sativa indica hybrid that finishes in about 60 days. And it does not smell like peanut butter I am told. Genetic info available at: http://en.seedfinder.eu/strain-info/Peanut_Butter_Breath/ThugPug_Genetics/

Not much info available on this girl. I was told it was a Jilly Bean Jesus crossed to 9 Pound Hammer. Been around the Seattle area thanks to Artizen but seems they no longer have it on their site. 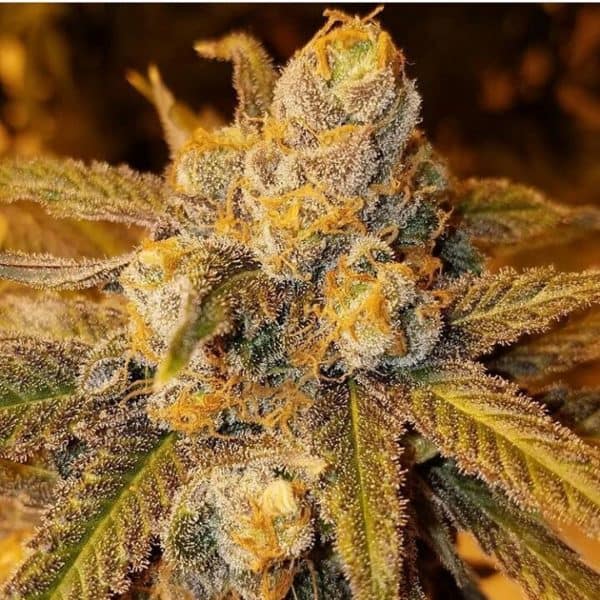 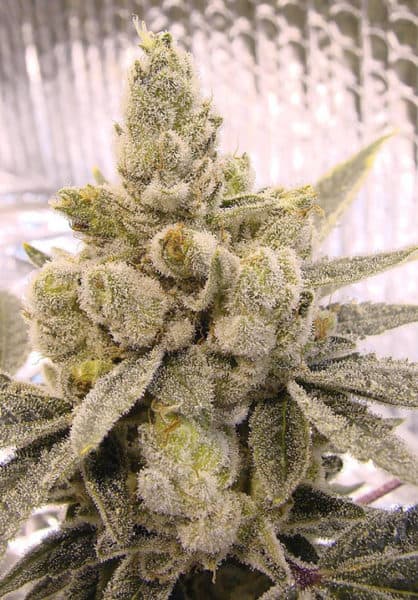 Plenty of info on this girl online so you can Google her and also find a really long thread on IC Mag here. Possibly the largest thread on the site, it was so big they had to split it into an old and new thread.

You can watch her grow here too of course.

I am really looking forward to growing this girl out, especially after receiving a fake glue cut.

I have been assured this cut is the real deal.

Fingers crossed because she is half my grow and I don’t like being duped.

These ladies have been vegging this past week and I am just about to flip them.

That’s pretty high for me but I wanted to push the glue a bit because the other plants are quite a bit taller. I hear she is a big, stretchy and vigorous plant so I think she will catch up if not even overtake the others.

Hope to get some pics up before flip but unfortunately my camera just died. No one locally had what I wanted so had to order one. So pics soon and also a YouTube video coming asap.

So today is day 7 for my mixed grow. I just put in a 2 x 4 screen because the Bruce Banner was getting tall and soon it would be difficult to get a screen on. As it was I broke a couple of branches.

The Space Goo and Peanut Butter Breath are also starting to get tall. The GG4 is still below the screen but hopefully will stretch above it this week.

I made a few environmental tweaks as well. Humidity is low in my closet because its passive air source is a room with gas heat where the humidity is usually low to mid twenties. The humidifier adds about 10% so my room humidity is 24% and the grow is at 35% which is still low but better. When the weather is rainier(often in Washington) humidity is about 45-50%.

The other change I made was lowering my fan speed to pull less dry air in and allow the temperature to climb. I will be adding an article on the other LST which is leaf surface temperature to explain more.

Day 14 is when I like to do my leaf stripping. Some people like to do it on day 21 and some people think it’s crazy to do it at all.

Leaf stripping or schwazzing wont hurt your plants. Yes they look pathetic but they will recover fast. I can already see new growth several hours later.

If you strip off everything with a stem the leaves will come back with trichomes so you wont have useless water leaves to deal with. Do it now or do it later but at some point you will be dealing with fan leaves.

I cant explain exactly what happens or why but it throws the plants into extreme bud mode. It also lets light and air get to the lower buds that would just be larf if the plants are left alone. Here are some before pictures and after pics of the defoliation.

It has been 6 days since my plants were leaf stripped. They have been recovering, although not as fast as I thought. I think this was due to a change in my watering schedule. Normally I feed multiple times a day but this past few weeks I have been feeding once a day. I think these girls needed more food for recovery.

I know leaf stripping is controversial and some think it harms a plant but it doesn’t. Go check out Grand Master Level or HiGrowGroup on YouTube if you doubt me. They have some of the best grows I have seen and both leaf strip.

Here are a few pics from day 21, this is 6 days after I defoliated these girls:

Day 28 The Frost Is Coming

Ran out of the V+B so decided to run Canna Aqua Flores and the rest of the line because I had it here. I also decided to add some Canna Boost. Still too early to tell if there is a difference but smells and frost started picking up right after use.

The Aqua Flores is made for recirculating systems so I went with that rather than their Coco nutes. I like how stable the pH stays in my reservoir when I use it.

Here are some day 28 pics of mostly the glue:

Day 35 is here and with it comes some increased trichome production and calyx swelling too. For the most part everything is doing well.

The Bruce Banner is starting to put on some frost and the buds are continuing to size up. The Space Goo probably has the most trichomes showing at this point and nice large buds developing.

The Glue is looking good and I can see the calyxes swelling nicely and a few plants look zuzzy because of the thick trichome growth going on.

I think they are behind a bit from where they should be though. I flowered them small expecting a lot of stretch from them. I think because of their smaller size the leaf strip may have stunted them a bit. They took about a week to recover whereas larger more vigorous plants recover much faster, usually in about 3 days. Here are some day 35 pics of the ladies:

Day 42 is here and I have started to flush. I am not running straight water yet but I have cut my nutes in half. So running about 320 ppms.

The buds are very nice but they are small. Since the calyxes are still swelling I didn’t want to cut all nutes off cold turkey but around day 45 they will go on a full flush.

I think leaf stripping works but it is meant for larger plants. I know it set these girls back and took almost a week for them to recover and it should not take that long.

I also noticed the plants are not drinking as fast as they should. I inspected the PBB that I pulled and it had nice white healthy roots but they were mostly on the bottom half of the pot. In order for a multi feed system to work they need to completely fill the pot so they can drink a lot. Otherwise they will be over watered.

So I started looking into air pruning the roots before they get potted up. I am going to experiment with letting more of the roots get air pruned at the start so they will develop a fuller root system.

When a root gets air pruned like coming out of a smart pot the tip dies. But it creates branching on the rest of the root which helps fill the medium with roots.

One way to do this is to transplant your plugs into 3 inch rockwool blocks kept on a rack so the bottom roots can be air pruned too. You can flood them or hand water but is important for the bottom to be elevated once the water is gone.

Here are some pics from day 42:

These girls are starting to fade on day 49 so they wont be going much longer. The trichomes are about 80% cloudy right now.

The Bruce Banner is starting to show some purple and the GG4 is starting to go yellow. At this point the Bruce Banner looks closer to finishing than the glue. I thought it would be the opposite. However the BB doesn’t seem to be callyxing the way it did before and they look like they need more time to swell up.

They have been fed at about 250 ppm this past week with Flower Fuel which is 1-34-32. I think it’s a pretty good bloom booster and it’s pretty cheap too. I am sure the high P and K along with the low N has started the fade.
Here are some pics from day 49:

Terpinator Does It Work?

This week I am going to be testing out some Terpinator to see if I can increase trichomes and terpines. This nutrient has had mixed reviews. Some love it and others say it’s snake oil. What I noticed is using it at higher levels seems to work. 15 – 30 ml per gallon is recommended in flower. Those using it at 10 ml had mixed results.


Since it is pretty dilute it can get pricey to use. What I am going to do is mix it at 30 ml a gallon in a bucket and top feed it to my plants so I shouldn’t need to use more than 2 gallons on this test. My girls are pretty far along and I will only be using it for a week so I am not sure if I will get the results I am hoping for.

Things are progressing much faster than I thought and it looks like I will be harvesting earlier than expected. Most likely at 56 days.

Everything is fading hard. The purples are really coming out as well as the yellows. Some leaves are drying up too especially on the Bruce Banner.

Today I turned my screen into a free floating one using light hangers. My arms were bare and the resin stuck the hairs on them together. Good thing I didn’t need to go out because I smell very dank. A few pics of the Bruce Banner from day 52 just before harvest.